One of our long-term research objectives is to determine whether the same black vulture pair occupies the shed each year or if occupancy changes, possibly resulting from some form of competition. Another objective of our multi-generational study is to describe relationships between family members from year to year. When three vultures showed up at the shed January 2013, we wanted to know who they were and whether they were related.

Tagging the vultures enables us to identify specific individuals and to determine their inter-relationships. Leg bands or wing tags are placed on many species of birds each year to assist with research regarding parental behavior, migration patterns, survival rates, extended family associations, monogamy, and minimum breeding ages.

Wing tags rather than leg bands are broadly used to identify individual black vultures. This is because vultures regularly urinate on their legs, thereby killing the bacteria that might otherwise accumulate as a result of their walking through carrion while they clean up the environment. This urination also serves to cool their bodies through evaporation. If the kind of leg bands used for other birds were used for vultures, the bands could become encrusted with fecal residue and result in debilitating leg irritation. For this reason, patagial tags are used for vultures. These tags are secured to the birds’ patagium, a fold of skin in the front of their wings. The tags can be read from a considerable distance, both when the vultures are flying overhead and when they are perched. They remain in place for several years, often for the life-span of the bird.

Tri-State is fortunate to have support for our tagging from David Barber of Hawk Mountain Sanctuary. David has extensive experience in wing-tagging and trains others in this procedure. Three interns accompanied David when he tagged a black vulture in northern Delaware on May 7, 2013. They were Marian Wahl of San Francisco, Marta Sendra Vega of Cadiz, Spain, and Hankyu Kim of Seoul, South Korea.

Adult vultures are tagged shortly after their chicks hatch since the adults are much less likely to abandon a nest then.  Chicks are tagged a couple weeks before they fledge, after which they are even more difficult to capture.  Gender was determined by DNA testing.

The pictures below demonstrate the challenges and care involved in capturing, tagging, and tracking black vultures. Click on a picture to enlarge it. 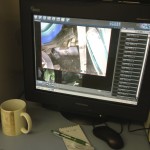 The Capture Squad monitored vulture movements as part of planning for a safe capture. 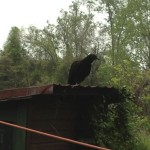 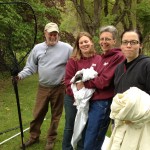 Tri-State’s Capture Squad is elated after a long, thoughtful, and successful campaign. 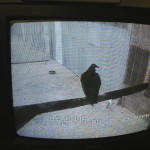 After capture, the male vulture was brought to Tri-State and monitored remotely in a holding pen until the tagging team was ready. 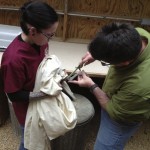 Prior to tagging, measurements were taken by skilled bird handlers and researchers. 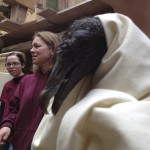 Tagging went smoothly and according to plan. 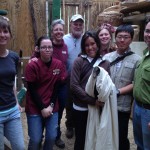 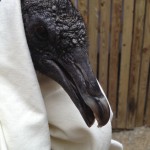 Tagged and measurements taken, black vulture #17 Is more than ready to return home. 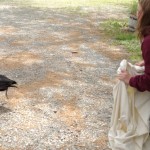 And return he did! Quick like a vulture. All the way home. 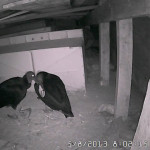 Explaining all this to his wife was a challange. 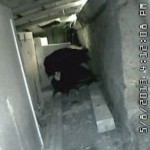 After the excitement, the parents promptly resumed their routines to care for their chick. 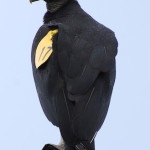 Now it was easy to distinguish the adult male from the female. 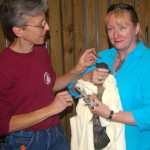 V-Cuber Lynn Helck (right) joined the team for tagging the three chicks, including “Stevie” and the two orphan chicks adopted by the adults. 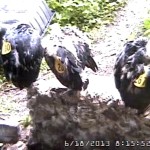 Now it was possible to easily distinguish between the three chicks. 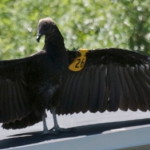 Tag numbers are visable whether the birds are perched or soaring overhead. 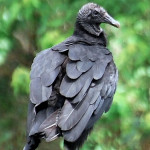 The wiley adult female eluded attempts to tag her. This year. 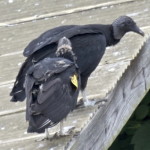 Since the adult male was tagged, we could determine whether he or she was caring for the chicks at any point in time. 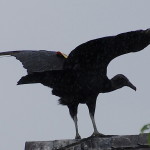 The tags will enable us to identify individual members of this family throughout the year.

Three of these six birds have been sighted since they were tagged:

If you spot any vultures of any species with wing tags anywhere, please report your sighting in the comment section below. In addition, please submit information about US and Canadian sightings to the Bird Banding Laboratory. Include the date and location of the sighting, tag number, species, and any other pertinent information.  In return, the Laboratory will tell you where, when, and by whom the birds were tagged.  Reports can be submitted to BBL online at http://www.pwrc.usgs.gov/BBL/