Black vultures are commonly seen in the skies over America’s southern and eastern states.  They are gregarious, often seen in communal roosts or feeding on carrion, helping keep the environment clean.  Adults form long-term monogamous relationships and typically have two fluffy, yellow-beige colored chicks each year.  Adults share incubation and feeding responsibilities, and continue to feed their young for as long as eight months after fledging, helping to establish bonds among kin that last a lifetime.

This research and educational nest cam project is entering its seventh season, five of which have seen black vultures nesting in the same shed in northern Delaware. Key dates are on the Nest history page. The project is sponsored by Tri-State Bird Rescue and Research, Inc. of Newark, DE, Mike Postolan of Glenham NY, Bob Bryant of Hockessin DE, and the anonymous owner of the property where the nest is located.

Since Tri-State Bird Rescue & Research began streaming live video from this vulture shed in 2011, video has been watched by individuals living in 114 countries on 6 continents.

Viewing nesting behavior over the Internet, rather than observing the birds directly, avoids activity near the nest that could lead the adults to abandon it. PLEASE DO NOT TRY TO LOCATE THE NEST SITE OR APPROACH IT AS DOING SO COULD RESULT IN DEATH OF THE CHICKS AND THE END OF THIS RESEARCH.

Live video for other nests is also available at this website. Of particular interest is the Chimney Swift page, which features the only nest for this species from which live video is currently being streamed to the Internet. Other species include barred owls and eastern bluebirds. 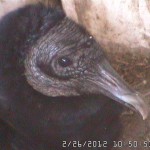